The Unending Amnesia Over Hindutva Terror

..[A]seemanand’s description of the plot in which he was involved became increasingly detailed. In our third and fourth interviews, he told me that his terrorist acts were sanctioned by the highest levels of the RSS—all the way up to Mohan Bhagwat, the current RSS chief, who was the organisation’s general secretary at the time. Aseemanand told me that Bhagwat said of the violence, “It’s very important that it be done. But you should not link it to the Sangh.”
Aseemanand told me about a meeting that allegedly took place, in July 2005. ..In a tent pitched by a river several kilometres away from the temple, Bhagwat and Kumar met with Aseemanand and his accomplice Sunil Joshi. Joshi informed Bhagwat of a plan to bomb several Muslim targets around India. According to Aseemanand, both RSS leaders approved, and Bhagwat told him, “You can work on this with Sunil. We will not be involved, but if you are doing this, you can consider us to be with you.”

(Reportage : The Believer: Swami Aseemanand’s radical service to the Sangh, by LEENA GITA REGHUNATH | 1 February 2014, Caravan Magazine, http://www.caravanmagazine.in/reportage/believer )
‘Law is an ass’ a phrase which was used by Charles Dickens in  ‘Oliver Twist’ in a completely different context today finds a deep resonance in this part of South Asia. And nothing illustrates this better than the predicament of what is popularly known as Hindutva terror.
The manner in which people who supposedly have been planners, masterminds, funders of the whole operations have been allowed to go scot free, the way in which one finds acquittal of accused case after case, the manner in which a supposedly secular government at the hustings has declined to ban proto-fascist organisations who were found to be involved in criminal terrorist operations or the apathy with which the media – which calls itself watchdog of democracy – has preferred to softpedal the threat it poses to the foundations of the Republic itself is unprecedented.
And the less said about the curious case of Lt Col Purohit, it is better. This gentleman, who was with the Military Intelligence Wing, is languishing in jail since last more than five years as an accused/key figure in many terror attacks, involving many RSS and other Hindutva activists but has yet not been suspended by his bosses and is in an uneviable situation the world has rarely witnessed where he is regularly receiving his salary with all the doles involved. (As an aside it need be mentioned here that this information was made available to the outside world by one of his co-accused himself – an ex army man Ramesh Upadhyaya – who filed RTI application to get the information.) And the Supreme Court has blocked the National Investigating Agency (NIA) from questioning him.
But the most urgent thing on the agenda is the fresh revelation that top leaders of the Hindutva brigade were not only very much in the know of this violent phase but were infact its real patrons.
In her reportage ‘The Believer : Swami Aseemanand’s radical service to the Sangh’ Leena Gita Raghunath  (February 2014 issue, http://www.caravanmagazine.in/reportage/believer ) has provided details of her four interviews with Assemanand in a span of more than two years which bring forth this lesser reported aspect. The total duration of these interviews ran into 09 hours and 26 minutes
It is widely reported that Assemanand, who started to work with RSS since his childhood and later focused his activities with affiliated organisation of the Sangh called Vanvasi Kalyan Ashram is presently on trial on charges which involves murder, criminal conspiracy and sedition, in connection with three bombings which witnessed 82 deaths. His name also finds mention in two other charge sheets involving two other blast cases but has not yet been formally declared an accused. Together, the five attacks killed 119 people.
This man who according to the author ‘is perhaps the most prominent face of Hindu extremist terrorism.’ is happy that he has been “. kept in the same cell as Gopal Godse,” and by his ‘..own account, hosted planning sessions, selected targets, provided funds for the construction of IEDs, and sheltered and otherwise aided those who planted the bombs.’
Describing his meetings with RSS Supremo Mohan Bhagwat and one of its key leaders Indresh Kumar he told the author

“Then they told me, ‘Swamiji, if you do this we will be at ease with it. Nothing wrong will happen then. Criminalisation nahin hoga (It will not be criminalised). If you do it, then people won’t say that we did a crime for the sake of committing a crime. It will be connected to the ideology. This is very important for Hindus. Please do this. You have our blessings.’”

She also describes how

‘Charge sheets filed by the investigative agencies allege that Kumar provided moral and material support to the conspirators, but they don’t implicate anyone as senior as Bhagwat. Although Kumar was interrogated once by the CBI, the case was later taken over by the NIA, which has not pursued the conspiracy past the level of Aseemanand and Pragya Singh.’

It is important to note that despite the criminal-terrorist role played by Aseemanand, till date neither the RSS nor the BJP have disowned him for his role nor have they taken back the award (Special Guruji Samman) which was given to him for his ‘meritorious service to the Sangh’ which was awarded to him on the occasion of the birth centenary of M S Golwalkar. (2005) Aseemanand has also confessed to ‘The Caravan’ that RSS-affiliated lawyers are providing his legal aid.
According to a press release issued by editor and executive editor of Caravan (http://www.caravanmagazine.in/press-release ) Mr Anant Nath and Dr Vinod K Jose respectively
‘Knowing the national relevance of the sensitive information that Aseemanand revealed to The Caravan journalist, in an interview which was conducted with the full consent of Aseemanand, we place these facts in front of the public, along with a tape recording and transcript of parts of the conversation that mention Mohan Bhagwat. “
This is not for the first time that such allegations have been raised against leaders of RSS.. Many of those activists of RSS or other Hindutva organisations who are behind bars for their role in different terror acts had shared with the investigating agencies their interaction with top leaders of RSS especially Indresh Kumar during different phases of the work or the instructions allegedly given by him or the mobilisation of funds he supposedly did for these terror acts. But this is probably for the first time that Mohan Bhagwat – a third generation RSS worker and present Supremo has been directly indicted by one of the accused.
All of us have been witness how RSS reacted to the allegations against Indresh which first emerged in late 2010  and how RSS closed ranks behind him. Dharanas were organised in different parts of the country to protest the ‘anti Hindu’ UPA dispensation at the centre which is on a ‘witchhunt mission’. In an unprecedented move Mohan Bhagwat, the Sangh Supremo had also participated in one such Dharanas.
An important fall out of these Dharanas was that all the talk of his ‘imminent arrest’ just died down. Neither the investigating agencies seemed keen to interrogate him nor the ruling Party at the centre appeared keen to take the investigations to their logical conclusion despite the political resolution adopted by the Congress Party at Burari (2010) to launch a ‘full probe into the RSS’s alleged terror links.’
Lata further adds :

“An officer at one of the investigating agencies, on the condition of anonymity, allowed me to inspect a secret report submitted to the Ministry of Home Affairs (MHA). The report requested that the MHA send a show-cause notice to RSS authorities, asking why the organisation should not be banned in light of the evidence against them. The MHA has not yet acted on the recommendation.”

She also describes the obstacles faced by the NIA in pursuing the cases. e.g. Supreme Court restrained the agency from interrogating Pragya Singh in the murder of Sunil Joshi in July 2012 on the specious ground that the case’s FIR was filed before the inception of the agency.
One does not know how the trials in these case proceed and for how long?
But the most important point on the immediate agenda is whether there would be fresh investigations to interrogate/nab the real planners as this exposure by Aseemanand makes it quite clear. Whether the UPA government which wears secularism on its sleeves would gather enough courage to go behind the planters or actual executioners – in fact the real pawns in the game – and go after the real masterminds,. Would Congress gather courage to confront all those higher ups in the Hindutva brigade who ‘blessed’ this killing of innocents to further their agenda of hatred and disharmony.
It was the fag end of the year 2010 when Rahul Gandhi had frankly admitted that

“The risk of a “home grown” extremist front, reacting to terror attacks coming from Pakistan or from Islamist groups in India, was a growing concern and one that demanded constant attention.”

..( Rahul Gandhi feels ..‘Quoted in Indian Express, Dec 18, 2010 ).
We know very well things did not move in the direction which his understanding entailed.
Definitely a lot depends upon the way the secular and left forces react to the present situation. The deciding factor would be whether they would limit themselves to sterile criticism of the role of the ‘dynasty’ and its cronies or they would strategise in such a manner that such majoritarian forces who are a danger to the very idea of the republic are put on the defensive.
Aseemanand’s revelation could be a new starting point. 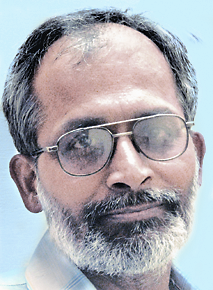 Subhash gatade is a well known journalist, left-wing thinker and human rights activist. He has been writing for the popular media and a variety of journals and websites on issues of history and politics, human right violations and state repression, communalism and caste, violence against dalits and minorities, religious sectarianism and neo-liberalism, and a host of other issues that analyse and hold a mirror to South asian society in the past three decades. He is an important chronicler of our times, whose writings are as much a comment on the mainstream media in this region as on the issues he writes about. Subhash Gatade is very well known despite having been published very little in the mainstream media, and is highly respected by scholars and social activists. He writes in both English and Hindi, which makes his role as public intellectual very significant. He edits Sandhan, a Hindi journal, and is author of Pahad Se Uncha Admi, a book on Dasrath Majhi for children, and Nathuram Godse’s Heirs: The Menace of Terrorism in India.
"हस्तक्षेप"पाठकों-मित्रों के सहयोग से संचालित होता है। छोटी सी राशि से हस्तक्षेप के संचालन में योगदान दें। सहायता करने के लिए यहां क्लिक करें

This site uses Akismet to reduce spam. Learn how your comment data is processed.